This short article is not intended as an in-depth analysis of Brexit; it only presents an update on some the latest developments surrounding Brexit.

Amidst a staggering rise of corona infections in Britain, Prime Minister Boris Johnson has been busy altering, unilaterally, the so-called “Northern Ireland Protocol” within the Brexit agreement. He himself had signed the agreement earlier this year, and the House of Commons had subsequently ratified it. However, on September 8, the Commons passed the “Internal Market Bill”, which grants UK government the power to ignore provisions of the original Northern Ireland Protocol.

Northern Ireland has been the sticking point of the Brexit negotiations since the beginning. It would have been substantially easier for the UK to leave the EU, had it not been for the Good Friday Agreement that implemented a soft border between the Irish Republic and the North (a part of the UK). Aside from some right-wing nationalists, no one has seriously suggested to bring back guard towers and border checks, which would risk bringing back the civil war in Northern Ireland between the Unionists and Republicans that was ended by the Good Friday Agreement. This means that there was only one other option, which the original Northern Ireland Protocol implemented: the North, in effect, maintains access to the EU market, while keeping the rest of the UK out. This meant a hard border through the Irish Sea, which the original agreement effectively implemented, but Jonson no longer honours.1

The Internal Market Bill has caused quite a stir on both sides of the English Channel. The Northern Ireland Assembly immediately passed a motion that rejects Johnson’s Internal Market Bill. The Scottish Government refused consent for the Bill, and Scottish Prime Minister Nicola Sturgeon announced her intention to unveil a new specific plan for a second referendum for independence from the UK. In support of Boris Johnson, Northern Ireland’s nationalist party, the DUP (Democratic Unionist Party), has touted that the previously agreed-upon Northern Ireland Protocol “makes the North ‘Europe’s pawn’”. Once again, British chauvinism sets the tone for Brexit discourse. 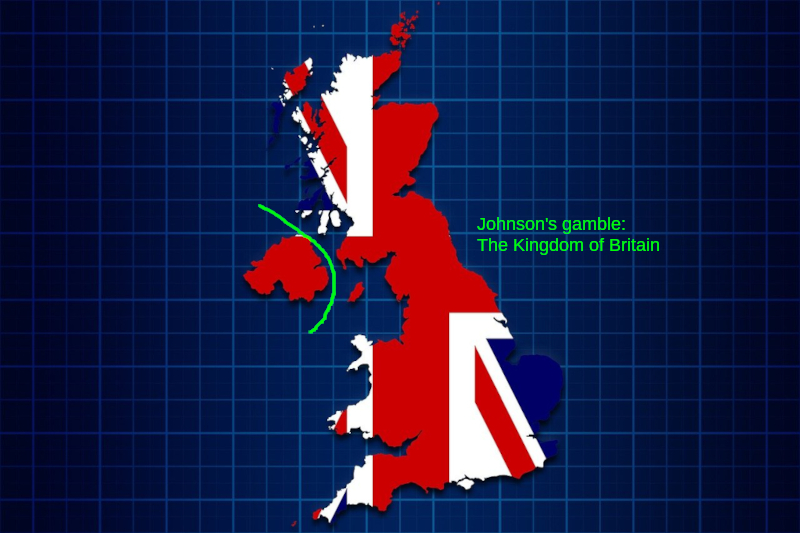 On the other side of the Channel, the EU calls the bill a violation of international law, which it clearly is. Moreover, the EU threatens to impose a full-scale trade border in the Irish Sea, unless Johnson withdraws the changes, and has launched legal action against the UK. A German paper talks of irresponsible law-breaking and gambling without regard for consequences. Indeed, to Johnson, it’s all a show. His “Borisgraph” rant2 of September 9, for example, exhausts itself in rhetoric like “I believe”, “I have never tired of saying”, “[w]e excised the baleful presence of the Northern Ireland ‘backstop’”, “we cannot go back to the dark days”. Boris Johnson—“sappy words, zero substance” is the sarcastic verdict.

So what unilateral changes to the Northern Ireland Protocol set those fireworks off? The first change concerns the previously agreed-upon customs proceedings, which state that companies moving goods from Northern Ireland to other parts of the UK have to complete export declaration forms. This proceeding was meant to respect the Good Friday Agreement, which forbids a hard border between the Republic of Ireland and the North. Thus, the original customs proceedings guarantee free trade within the whole of Ireland, but not between the North and the rest of the UK. However, in violation of this agreement, the Internal Market Bill now grants government ministers the power to overrule or ignore this provision.

The second change concerns state aid, which is a power that rests with the EU, or for which the EU maintains oversight if the UK government subsidises companies. Again, the Internal Market Bill grants ministers the power to overrule or ignore the original agreement. The EU strongly opposes this change because it would give British companies an unfair advantage.

However, what The Guardian article describes as intention is, in my view, Johnson’s preparation for a hard Brexit, that is, for leaving the EU on December 31 without a trade agreement in place. But there is a catch. Johnson intends to maintain full administrative and economic control over Northern Ireland, and intends to secure access to the EU market without restrictions. Whether this gamble pays off for him remains to be seen, but I suspect the people of Northern Ireland and the UK are in for a turbulent autumn, as the Brexit negotiations enter their final stage. That’s because a Brexit without a trade agreement is likely to cause chaos for businesses on both sides of the English Channel.

If Johnson’s gamble pays off, he will not have to worry about the economic repercussions of a hard Brexit, and he will succeed in shutting down the free movement of labour. This was a main reason why hard-line nationalists pushed their Brexit agenda. However, should the EU shut down trade to and from Northern Ireland, as Johnson touts in his Telegraph article, then it will be ordinary people who suffer the consequences, especially the citizens of Northern Ireland.

It was always the ordinary people who would suffer the consequences of Brexit: free movement of labour with certain protections, unrestricted road traffic, unrestricted access to health care, standardized consumer protection—all gone. In come worries about jobs, made worse by the corona pandemic, and worries about food and medicine shortages, as well as concerns about prices continuing to rise.

“But we are now free to make our own deals, and we are making those deals”, Brexiteers claim. First off, Brexit is not a prerequisite for making trade deals, as EU member states are free to enter into agreements with partners outside of the Union. Next, yes, one would have to acknowledge the recent free trade agreement with Japan, which may boost Britain’s GDP by an estimated £1.5bn. However, there are a few unknowns attached to that deal, namely the period over which GDP would experience a boost, and, more importantly, what the decline of GDP was because of Brexit. It is doubtful whether the Japan deal presents an actual boost because it would, more likely, merely make up for a portion of the decline.

Be this as it may, there is a more important caveat that comes with the deal. That is that the deal is considered as a step towards Britain joining the Trans-Pacific Partnership, a block which, besides Japan, includes Australia, Canada, Mexico and New Zealand. Ironically, Britain is running from one block, allegedly to be free to make its own rules, but is now entering another block, which also has rules and regulations. Comedians could not make this stuff up if they tried.

2 “The Borisgraph”, or “The Daily Borisgraph”, is a recurring theme in Private Eye, Britain’s satire magazine. The theme mocks The Telegraph newspaper, which Johnson repeatedly uses as a platform for spreading his guff.

Should the UK leave the European Union? Differing Ideas about the Coming Vote

Editors’ Note: MHI, which takes no position on this question, publishes here two detailed analyses of the case for remaining in the European Union (EU), the case for leaving it–known as Brexit—and the reasons for […]

Government in Chaos over Brexit; People Take to the Streets

After a million strong march to “Put it to the People”, the UK government is hurtling toward crisis over its inability to come up with a majority-backed plan for exiting the European Union. […]