We had two protests in London, 20 and 21 January. Friday’s demonstration was a spontaneous reaction outside of the American embassy in Grosvenor Square. It was planned quickly and noisily attended on a frosty night by up to a couple of thousand people, including many on the British Left, opposed to the inauguration of the an American President who has sent shockwaves around the world as to what he plans to unleash against the democratic gains of progressive people so far. Many animated discussions took place under the piercing street lamps, punctuated with organised chants from steaming mouths.

What everyone was not prepared for was the huge response to the official “Women’s March on London” on the Saturday, as people again assembled from 12 noon:

“We will march, wherever we march, for the protection of our fundamental rights and for the safeguarding of freedoms threatened by recent political events. We unite and stand together for the dignity and equality of all peoples, for the safety and health of our planet and for the strength of our vibrant and diverse communities.

“We will come together in the spirit of democracy, honouring the champions of human rights who have gone before us. Please spread the word, so that our numbers are too great to ignore and the message to the world is clear.”

The numbers were indeed great: thousands of women joined by men, children, families, all genders, colours, disabilities and ages, 100,000 strong and more. The quietly militant but dignified march wound for two miles, from the U.S. embassy to Trafalgar Square, causing Central London pedestrian and traffic to stand still. The scale of the protests across the country was comparable with those against the Iraq War years earlier. Women Power on the move.

The mood was of one of optimism and defiance, but political with a small “p”. There were lots of imaginative, homemade placards on the demo, among them, “A woman’s place is in revolution”, “Pussies Riot” and a thoughtful quote that “Fascism arrives as your friend”. Many conversations were anti-Trump, but not pro-Hillary Clinton. Everyone expressed solidarity with the Washington March.

The question posed by us in conversations, “What next?” was well received; people took our pamphlets and agreed to have further discussion. 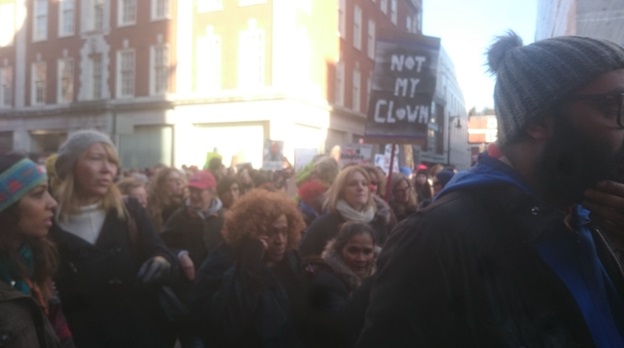 From another London marcher:

The Friday evening turnout consisted mostly of the organised left. It had a serious tone, with activists hawking their newspapers and speakers on for the almost the full two hours of the protest. The focus tended to be on the racist aspects of Trump’s election campaign and his cabinet picks.

The following day’s “women’s march” was huge by the standards of recent protests. There have been estimates of over a hundred thousand people, and while there was a clear majority of women, there were plenty of men too. It had a more celebratory atmosphere than the day before, and was generally of better humour. There were many homemade banners with witty slogans, many of them centred around Trump’s self-confessed sexual assaults–so pictures of cats with “this pussy bites back”, “this pussy has claws”, “keep your tiny orange hands away from my pussy”.

In talking to people about why they were on the march, many suggested it wasn’t even specifically about Trump but that he was the embodiment of so many reactionary developments: Trump is hostile towards anything that might have been seen as “progressive” since the civil rights era, not just his racism and misogyny, but his disregard for any environmental protection legislation, his efforts to intimidate the media’s scrutiny of him and his projection of a more authoritarian form of government, including a cavalier attitude to nuclear weapons.

It was interesting that when asked if it was possible to stop Trump, many looked for an impeachment for the misuse of his office to enrich himself, others thought that the opposition to him would grow, as the blundering clown that he is became apparent to everyone. Most, however, did not think Trump could be stopped during this term, but that the opposition had to be built now to ensure that this did not ever happen again.

When I teased out why they had come on the march if they didn’t think he could be stopped, people were more strategic and far-sighted than they are sometimes given credit for. They said it was important to register a protest–to give people who wanted to resist some hope, to know they were not alone, that millions of people across the world are against everything that Trump stands for. These marchers were clear that it the demonstration was not aimed at trying to change his mind (he was too closed for that), but rather to gather the forces of those who are prepared to challenge him.

Why do something if you don’t expect to win? The point is that the marchers aspire to see real change, even though they know it is not an immediate prospect. Standing up and being counted is not a tokenistic gesture; it is the hope that if we do it now, it will inspire others to join later. It has that balance of inspiration and realism, which those who dismiss the potential of a mass mobilisation like this, really don’t understand. 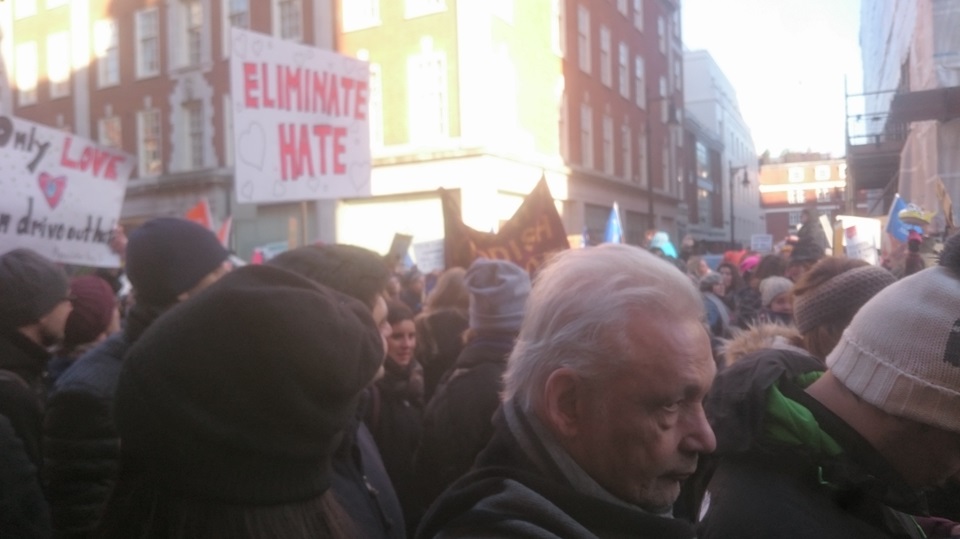 Reflections from a woman marcher about criticisms of the march:

On Sunday I shared a link on my Facebook wall, where Elisabeth Warren gives a passionate speech for the Boston Women’s March crowd. Someone commented on my post, and I think it’s worth sharing, since it seems to be a semi-popular stand to take. The comment asked why people are rallying up now, instead of when USA was dropping bombs over Syria? According to the commenter, this is a “sorry example of double standards of the worst kind”.

One can choose to be cynical and trash talk an event because it has gone mainstream and gained more popularity than another important cause. This is a pessimistic and unproductive way of thinking.

Should people remain silent simply because they haven’t spoken up before, or because there are other/worse problems in the world? No.

Is there a double standard in standing up for your own rights and not for others? I think that we are so pressured in our own lives, barely having time for anything but work and caring for our families, that when we do take the time to engage in activism, it is typically when something hits home and threatens the lives of ourselves and our loved ones. This isn’t a double standard; it’s a matter of ability and awareness. People become aware of issues at different times, and arrive at conclusions at different speeds.

Thirdly, does fighting for the rights of one oppressed group steal activism from another? No.

The more activism there is for any liberatory cause, the better. All movements that fight injustice and oppression (whether it be racism, sexism, etc.) should unite in the fight for their own causes. We are all fighting from our own perspectives, but we all have the same goal–freedom from oppression.

The commenter also stated: “Talk about cheap thrills and emotional preprogramming in order to avoid all reason and fact based thinking amongst the sheeple”. I think if demonstrating against something that hurts you and people you love is considered too hipster and fake, then there is no hope for making the world better.

If the bombing of Syria would have been widely demonstrated with a lot of media coverage, wouldn’t then this commenter have criticised it because the previous bombing wasn’t so widely protested? What positive change can come from this way of thinking, and how far back in history do we go when comparing reactions to injustices?

People in Western societies marching for a couple of hours with pink hats on isn’t enough to change the world, but the movements that develop from this might make a difference. That’s what is important–harnessing the energy from this event to gain further momentum in the fight against oppression worldwide.

Also, I think it’s false to say that nobody cared for Syria, or Iraq, or Kosovo or… From what I’ve heard, the demonstration against the Iraq war had a bigger turnout than Sunday’s march in London, yet it got poor coverage in the media. The Women’s March became mainstream because it was protesting against the president of the USA, and even the establishment isn’t ready for him. People protest all the time, but mainstream media doesn’t always cover it and downplays the numbers.

Will We Allow Trump to Get Away with Fomenting White Supremacy and Racist Violence?

We cannot count on any part of the U.S. government to rescue us. It did not force Trump to repudiate his vile response to the white-supremacist violence in Charlottesville. Our real hope lies with the Resistance that can bring Trump down.

We are living the consequences, 150 years later, of the failure of the Civil War and Reconstruction to uproot the plague of racism. We need to do what it takes to stop Trump from fomenting white supremacy and racist violence NOW, and to uproot them permanently. […]

Trump Rolls Out New ‘Muslim Ban’ and Court Blocks It

by Anne Jaclard Donald Trump’s second “Muslim ban” was to go into effect tomorrow, March 16, but it was just stayed by a federal judge in Hawaii, who considers that its Constitutional violations are substantially […]

“A Picture is Worth 80,562 Words: Response to Ted Rall.” Andrew Kliman’s picture responds to the March 1 statement by Rall that Trump has likely “already done most of the damage that he can do.” […]